As it's the last Friday of the month, it's time for a bunch of bloggers to post for the monthly Cephalopod Coffeehouse (a.k.a. "Friendly Gathering") hosted by The Armchair Squid. The idea behind this monthly hop is that each month, participants will post about their favourite book read in the last month.

I read three books during November, and I really enjoyed all of them. It was kind of hard to choose which one to review here, but I decided to review 8-BIT CHRISTMAS by Kevin Jakubowski. 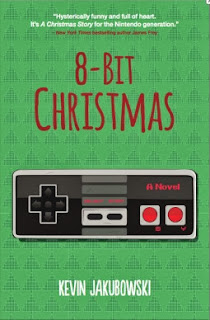 Thank you to NetGalley for providing this ARC copy.

I put this on the "children's literature" shelf, even though it's narrated by an adult character looking back on his Nintento-crazed childhood. But if you were a child in the 80s, you'll probably appreciate this one.

Story:
Jake is 9 years old when the first glorious grey Nintendo Entertainment System hits the market. The richest and most spoiled kid in town gets a Nintendo and all the other kids are suddenly swarming onto his front lawn, looking for new ways to suck up to him so they can have a turn on his NES. He only lets 10 kids in at a time on weekends, so the stakes are high and the competition fierce. Kids even go so far as to surrender some of their best toys just so they can go down to the rich kid's basement and Nintendo-land.

All over town, kids begin plotting how to get their parents to give them Nintendos for Christmas. But when disaster strikes - starting with a kid's tantrum, and leading to a falling TV and ultimately a squashed dog - the town's parents are up in arms about the evils of Nintendo. The only NES in town is no longer available for weekend tournaments, and the kids are getting desperate. The parents even go so nuts they arrange for local stores to stop stocking NESes on their shelves. All the kids in Jake's class are now kissing their dreams of owning a NES of their own goodbye. But Jake isn't giving up on his dream. A stroke of inspiration gives him a new plan for how to save the town from being Nintendoless forever.

My thoughts:
I kind of LOVED this book. As a child of the '80s, but also as someone who can apparently appreciate Kevin Jakubowski's sense of humour, I was snorting with laughter at almost every turn of a page (or "turn", really, as I read this on Kindle). Also, I could relate to that whole "rich kid with a NES" thing, since we had a neighbour who had every game console known to man, while the rest of the kids in the street made do with our hand-me-down Atari.

Some parts of the book seemed a bit odd to me, for e.g. rather modern-sounding dialogue like "Dude!" which I'm not sure was authentic to the 80s. But what do I know, I was just a kid back then. Perhaps my memory is rusty. ;) I also found myself disappointed with the fact that Jake didn't get a NES for Christmas - even though he got something seriously awesome instead (and no, I don't mean the Lite Brite. haha). But yeah, all in all I thought this was a highly entertaining read, and I would recommend it to anyone who:

a) can relate to an obsessive love/fondness for Nintendo,
(I myself had a Super NES, which I bought with my own saved up pocket money at age 12, and it was still beautifully lumpy and grey)
b) loves the '80s, or
c) wants to enjoy a large number of laughs (it's the best medicine after all).

Also read in November:
☆Hard to Handle by Jessica Lemmon
☆The Almost Girl by Amalie Howard


(both courtesy of NetGalley. Thank you!)
Posted by Trisha at 22:54