I'm NaNoing this year too 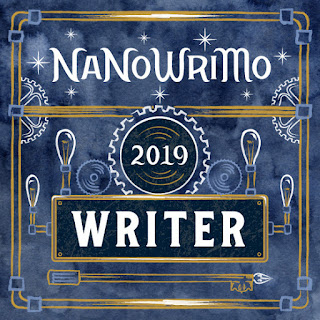 I just wanted to quickly update to say that I am indeed participating in NaNoWriMo this year.

The new site has taken a lot of getting used to, and I know that many users are grappling with the extreme bugginess of the site. Clearly it wasn't quite ready to go at launch time on November 1st, but sometimes you get lucky and find workarounds that work for you.

One of the biggest problems people are facing is the inability to use the default type of word count updating method - the "total words" option. For me, adding words written during each session is working, but it doesn't work for everyone. And for me, adding my overall word count total does NOT work. It looks like it's updated, but when you refresh and go back to it, the word count has reverted to the old count.

I count myself lucky to only have that problem, where other people are having what sounds like an infuriating issue with their projects being deleted / disappearing over and over again. They've had to add it back repeatedly, and some seem just about ready to give up.

I'm hoping that many of these teething issues will be resolved soon, but it seems like the NaNo team is very short-staffed, and they're dealing with what looks like thousands of complaints. So it can't be a fun time for them right now!

As for my actual writing? I am working on adding words to pre-existing projects. The main project is one that I had to do some corrections for before November 1st, because I had previously stalled at a certain point of the book. I had to revise my plan for how the story was going, as it just didn't seem to be working. So that was done before November began, and while it was a little slow getting back into the story, I feel like it's flowing nicely now. These are my first projects where I'm writing to a beat sheet, and I'm hoping that when I get to the revision stage, I'll find myself with far less of a mess than I have in the past (in my pantsing days). Time will tell!

I went to a kick-off party which was a lot of fun, and I'll go to the November 30th Write Night for my region too. All in all, I just love NaNo and always get sucked into doing it, even in those years when I'm not sure I should.

Is anyone else doing NaNo too?
Posted by Trisha at 15:24 15 comments