Updating every 2 months...well, it's better than never updating at all, right?!?! 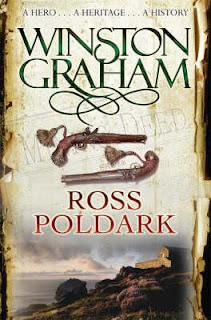 I don't think I had heard about the Poldark series (which consists of 11 books or something!) prior to seeing this book for 50% off on Book Depository in the "bargain bin" section. Apparently my mum is familiar with a miniseries from years ago that was on telly, but I haven't seen either series (there are 2 apparently) myself. Reading the description of this book though, I decided I must buy it, and not just because it was at its bargain price.

This is the blurb from GoodReads:


"Cornwall in the 1780s - when powerful forces of revolution and reaction are at large in the world.

Tired from a grim war in America, Ross Poldark returns to his land and his family. But the joyful homecoming he has anticipated turns sour, for his father is dead, his estate is derelict and the girl he loves is engaged to his cousin.

But his sympathy for the destitute miners and farmers of the district leads him to rescue a half-starved urchin girl from a fairground brawl and take her home - an act which alters the whole course of his life..."


So I bought the book, as well as books 2 & 3, and started reading. I was delighted by what I read. This book made me laugh and also made me swoon. The supporting characters are a great strength of this book, though of course Ross and Demelza provided more than enough intrigue to keep me hooked. But I love the quirkiness of the supporting characters, like Prudie and her "craw'ers" (lice), and Jud and his "tedn right, tedn fair, tedn British" (to paraphrase).
Just from reading book #1, and what little I've read of book #2 so far, I'd definitely recommend this series.


Ugggghhhh, not this again.

The only updates I really have are that I'm doing well with my reading goal...and I paid for some of the chosen artwork for Woody's A Girl's next album, titled OBLIVION, which has an outer space theme (both my bandmate and I are in love with the awesome artwork by this artist named April - you can view this artwork HERE.

I hope to get at least one more song done and sent to Billy this evening. So there's that...
Posted by Trisha at 10:22 8 comments