Wow, here it is! My first post for 2018. I've done a lot of reading so far this year, largely because while I was overseas I was sick practically the entire time, so on those days when I did a lot of lazing around I took to reading. And reading. And reading. Anyway, for February this is the book I enjoyed the most, keeping in mind that I didn't rate any of my reads 5 stars during January or February. 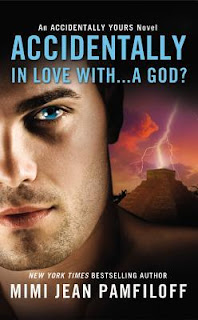 I've had this book on my Kindle for aaaages but only just read it now. Even though it was a light-hearted kind of simple little story, I really loved it - it had me cracking up on a regular basis, and the romance was pretty steamy even with two virgins as the main characters. ;)

Emma annoyed and (totally) exasperated me sometimes, but I couldn't hold it against her when she pretty quickly realised what an idiot she was after every idiotic thing she did. Guy had a lot of patience considering he's 70k years old and definitely knew better in some instances than the 22-year-old (yep, quite the age difference, and Emma comments on this at one point too!) with far less life experience.

I'd recommend this for anyone who wants a fun, light read that includes some parts that may or may not make one gigglesnort.

Some of my fave quotes:

In real life, he’s an enigma. Maybe just a teensie jealous. Definitely overbearing. He’s also a voice only she can hear.

So who or what is he? He won’t say. But if she wants to be free, to be normal, Emma will have to trek to the jungles once ruled by the Mayans and find the forgotten ruin holding the answers.

However, the ruthless deity she’s about to unknowingly unleash on the modern world, might not be so easily extracted from her life. Bottom line, he’s got enemies, and now, so does she."

This month's updates on my own creative goals:
And that's about it for now. How are you doing with your goals/projects/etc?
Posted by Trisha at 09:11 11 comments