This year I am continuing with my goal of re-reading titles in my vast collection of pre-teen Point books that were super popular when I was in primary school. The purpose of re-reading these books is:


So far this year, I've re-read these two: 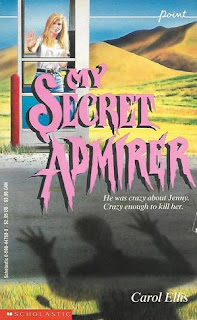 General thoughts:
I actually didn't remember much about this one, except I had a vague recollection of the cliff area (the Rimrocks). This book wasn't too bad, but wasn't one of my favourites either.

Jenny had a case of insta-love with David, but then he didn't really show up much in the whole story. Still, I was oddly convinced by their love. Ha.

I liked that every guy Jenny knew was a suspect - it wasn't one of those lame stories where the stupid heroine suspects everybody except the one that she should suspect. That said, Jenny was pretty stupid, for a number of reasons which I listed in my GoodReads review.

The 'Aww' factor:
Things that made me go 'aww' tended to be things that related to the sheer 80s/90s-ness of the story.

Dean and his "computer print-out", the telephone booth being a lifeline, everyone calling around on their house phones (no mobiles, no social media), Jenny's fashion wins (white shorts and a rainbow-striped shirt; later there's a washed out denim jacket).

Oh, and the VCR!! "Let's watch a tape." The mere fact that the telephone with its "built-in answering machine" was something fancy at the time.