Once again it's been two months since my last update. I'm okay with that. I have to be. ;) 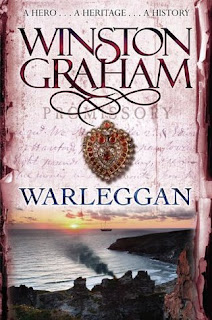 Last time I talked about a book I'd read, I mentioned the first in the Poldark series. I'm now on book five, which was written a long time after the first four novels. So far in August I've only finished one book, so I will have to discuss book #4 of the Poldark series.

This is the most controversial of the books to date, and you'll have to read and find out why. It's the book where we learn that Ross is far from perfect, and in my case, the book where Ross made me incredibly angry. The popular statement people seem to make while reading Warleggan is: "Ross, how could you!!"

It's good to read about imperfect characters - we know Demelza is imperfect and we have known from previous novels that Ross is as well. The two are in a frequent state of misunderstanding each other, and with some of the more heartbreaking things that have happened to them so far, the misunderstandings only grow deeper. The way this novel ended was heartening, however it's a fact that things will never be the same again. In so many ways during this and the previous novel, the damage has been irrevocably done.

The character of Elizabeth gets a bad wrap - yes, she's never been willing to let Ross go, but it's not her fault that he refuses to let go of her either. There is controversy due to the fact that many readers truly hate Elizabeth and seem to want to blame her for the ongoing attachment. But truly, it takes two to tango, so to speak. All in all I found this book to be super compelling and to me, the true hero(ine) of the story is Demelza. What a legendary character!

This is the blurb from GoodReads:


"Ross Poldark plunges into a speculative mining venture which threatens his financial security and his stormy marriage to Demelza. When the old attraction between Ross and Elizabeth begins to rekindle itself, Demelza retaliates by becoming dangerously involved with a Scottish cavalry officer."


Last time I had a relatively bleak update. Same this time. I'm keeping up with my reading, though this semester my studies are really trying to mess with that. I've also done a bit more work on my music, but not nearly as much as I wish I had (due to studies). I'm nearly at the point where I've got another song finished, I just need to work a bit more on the backing vocals. Then I can send the GB file to my bandmate for mixing, etc.

I think this year may be filled with disappointments when it comes to most of my goals - except the reading one! I'm doing better than I expected at the start of the year in that regard.
Posted by Trisha at 09:07 10 comments