This month it was difficult to choose between the two novels I read. In the end I've gone with Katie McGarry's Dare You To, Book #2 in the Pushing the Limits series and actually my favourite to date. The honourable mention was Nyrae Dawn's Façade (Games, #2). Click HERE for my full GoodReads review of Dare You To, which contains spoilers. 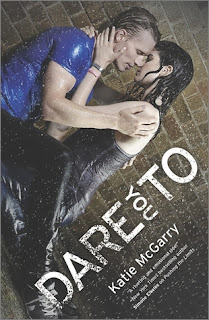 I wasn't really sure what I would think of this book, since I'd recently re-read Book #1 and remembered why I loved it...and why I didn't. I can't remember Book #3 very well, but I think I'm safe in saying Dare You To is my favourite.

A problem I had with Book #1 was the patheticness of the heroine, Echo. Beth is a totally different kettle of fish; she's no shrinking violet, and doesn't faint against walls or black out. Wow, what a meanie I am! Poor Echo. ;) But seriously, I like that Beth didn't need to be constantly caught (literally, caught before she fell over) by the sexy hero. Ryan also gets major stars for not calling Beth "baby". He didn't, right?! I only remember Noah doing that with Echo... Disclaimer: I love Noah.
Dare You To cracked me up on many occasions - Beth's language is just as foul as mine (well, okay, I'm worse), and she was so fiery. Her early exchanges with Ryan were hilarious - she was a real force for him to reckon with. I also found it refreshing that Ryan was the 'innocent' one in this story, as opposed to the usual 'good' girl / bad boy dynamic in this series. Ryan was still sexy, so there was no letdown there. But Beth taught him a thing or two about life. That said, of course I adore bad boy characters - as long as they're not total assholes.I remember reading Pushing the Limits and always wishing that Echo would become more of a rock for Noah. The school counsellor did that instead, while Noah was always having to be Echo's rock. Not that he was complaining. I was the one complaining. And I'm not really sure that Beth went much further in this regard than Echo did, but she had her moments. It was such a relief when she finally realised Ryan was right about her fear of having a new life...and possible happiness.

One downside to this read was seeing Isaiah so forlorn, but since I knew this gets addressed in Book #3, it wasn't really a problem.

I gave this book five stars!


"If anyone knew the truth about Beth Risk's home life, they'd send her mother to jail and seventeen-year-old Beth who knows where. So she protects her mom at all costs-until the day her uncle swoops in, and Beth finds herself starting over at a school where no one understands her. Except for the one guy who shouldn't get her, but does.

Ryan Stone is the town golden boy, a popular baseball star jock-with secrets he can't tell anyone. Not even the friends he shares everything with, including the constant dares to do crazy things. The craziest? Asking out the skater girl who couldn't be less interested in him.

But what begins as a dare becomes an intense attraction. Suddenly, the boy with the flawless image is risking everything for the girl he loves, and the girl who won't let anyone get too close is daring herself to want it all...."


Currently Reading: City of Glass,
Book #3 in The Mortal Insruments series
(a re-read so I can finally read the last three books).

First up, some news! There is a new blog for this blog hop, rather than us going straight to Misha's blog. Check out the new Do You Have Goals? blog, and join our hop if you want to have some extra motivation for achieving your goals. :)

Now, some updates on my own creative goals:


So, that's about it for August. How are you all going with your various creative / other goals? And yes, I have some catching up to do with your blogs too.
Posted by Trisha at 21:13 21 comments

Email ThisBlogThis!Share to TwitterShare to FacebookShare to Pinterest
Labels: Absolute Write, Blog Hops, Critiques, DAPHNE II, DARE YOU TO, Do You Have Goals? Blog Hop, Goals 2017, Katie McGarry, Music, OBLIVION, ON THE OUTSIDE, Reading, Revision, The Cephalopod Coffeehouse, Woody's A Girl

Hi everyone! I'm excited and honoured to be taking part in the release blitz for Reasonable Doubts by Kyra Lennon! 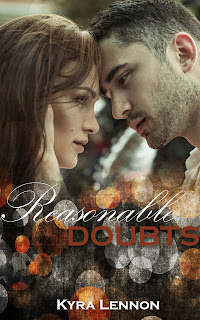 Blurb: Darcy Ryan is a woman on a mission. A mission to take down the corrupt cops who ensured her best friend, Matteo Torres, went to jail for a crime he didn’t commit – the murder of his wife, Rebecca.

Darcy is willing to do just about anything to prove his innocence, including getting up close and personal with lead detective, Finn Drake.

She knows she’s playing a dangerous game, but it gets more dangerous than she could have ever imagined when she discovers everything she thought she knew about Rebecca Torres was wrong, and Finn Drake isn’t the man she thought he was either.

Darcy’s life and her best friend’s freedom are on the line. With her entire world turned on its head and time running out, she has to decide. Should she take a chance on Drake and go against her gut instincts, or go it alone and pray she can find the killer before he finds her? 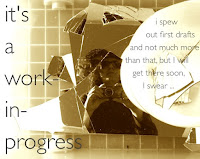 Time for a quick revision update!

I'm not entirely sure where I want or need my word count to be, honestly, and I'm not usually the type to worry more about word count than about the story making sense and flowing well. I'm sure there are a lot more words I can cut simply because they're not needed. And some parts still need rewriting.

I don't have much more to say, I suppose, so I'll leave it at this very short update. For now...onward!
Posted by Trisha at 22:05 6 comments