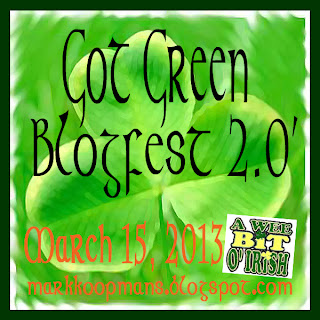 First off, I'll link back to last year's entry, where I talked about how I'd never visited Ireland before but would soon be in that very country. I later followed up with a description of what Ireland was like in comparison to what I'd expected (at Mark's suggestion). Turns out I actually had visited Ireland prior to 2012, back in 1980 as a ten-week-old baby. But I have much clearer memories of 2012's visit. hehe. My mum did tell me that I fell off a table somewhere at ten weeks old, though. No wonder I turned out so weird!

Now I have ten minutes of March 15th left, so I better get on with today's entry! I wanted to mention that in Australia, St Paddy's Day is a fairly huge deal. We throw big parties over here and there is a lot of drinking and obnoxious behaviour (so very Aussie of us). Australia also has a big Irish population, with more and more immigrating every year. So those guys are out in full force on their national day. So, yeah, it's a big party night here...which may explain why I'll be happy as a pig in mud on Sunday night, at home alone. :)

Happy St Paddy's Day for Sunday everyone!! And now that there are nine minutes left of March 15th, I'm off to brush my teeth and get some sleep!
Posted by Trisha at 23:54