Okay, I have read a few books this month and the one I have to choose is City of Lost Souls, Book #5 in The Mortal Instruments. My GoodReads review is one big gushy ramble of mostly "Clace"-related blabbering, but I did edit the review later to talk about "the rest of those characters" who are in fact quite significant. So I'll try to make this review some semblance of useful for anyone unfamiliar with and curious about the book and/or series. 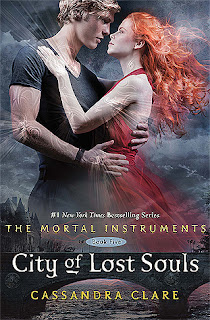 This entire series has been a combination of "eewwww", "OMG" and "aaaaahhhh must read on ASAP" for me. I struggled with Books #2 & #3, and if any of you have read the series you may be able to relate. After Book #3 was done, I foolishly thought there might be some light at the end of the tunnel in terms of character happiness. What was I thinking, huh? These books are definitely full of teen angst and drama, but I think the kids have good reason to be angsty, quite frankly, so I don't hold it against them.

Something to note about this book is that my respect for Clary grew so much. Sure, she frustrated me at times, but I thought she was so brave most of the way through, and the epitome of her bravery was in that epic scene near the end when she made the hardest decision she'd ever had to make before - you know the one, right?! I was really, seriously impressed with her at that point.

On a sort of related note, I actually do feel sorry for "the bad guy" of the story, because despite the fact that he is truly a heinous bad guy, Clary was right when she said he's incredibly lonely. Yeah, he's a creep, there's no denying that, but still, it's not his fault he was born the way he was, is it? He had no control over how he turned out, and a great wrong was done to him very early in his life.

This book was quite a slow and torturous read (even though it was good at the same time, and sort of psychologically harrowing), and I was very tempted to skip ahead just so I knew that something good would happen in the end, but I hung in there and kept reading the pages in the proper order, as is usual for me. It felt like it took forever to read this book, but in fact it only took me a few days.

Regarding other characters, Alec continued to annoy me, and I was totally on Magnus's side with that whole thing. I'm a fan of Maia and "Kyle". As for "Sizzy", I'm torn, but mostly because I don't really find vampires hot in general, because they're actually dead people and I don't think dead people are hot. Like, why would anyone want to be with a corpse? That said, I do love my Buffy and Angel hotties. Sigh. Anyway, yeah, I'm torn on this one. Isabelle is so full of life and warm and all that, and I just don't know if she's suited to dating a dead guy. But I'll reserve judgment till I conclude the series I guess. Also, I was happy to see Maryse Lightwood kicking arse, as well as Jocelyn. But when Jocelyn was telling Clary to get off Jace, I was like, "Step off, woman! Get ye gone! Leave your daughter be!"

All in all, I loved this book, and I'm now reading Book #6 and hoping the light will be VERY bright at the end of this long, hard-slog tunnel.


"The New York Times bestselling Mortal Instruments continues—and so do the thrills and danger for Jace, Clary, and Simon.

What price is too high to pay, even for love? When Jace and Clary meet again, Clary is horrified to discover that the demon Lilith’s magic has bound her beloved Jace together with her evil brother Sebastian, and that Jace has become a servant of evil. The Clave is out to destroy Sebastian, but there is no way to harm one boy without destroying the other. As Alec, Magnus, Simon, and Isabelle wheedle and bargain with Seelies, demons, and the merciless Iron Sisters to try to save Jace, Clary plays a dangerous game of her own. The price of losing is not just her own life, but Jace’s soul. She’s willing to do anything for Jace, but can she still trust him? Or is he truly lost?

Love. Blood. Betrayal. Revenge. Darkness threatens to claim the Shadowhunters in the harrowing fifth book of the Mortal Instruments series."

Just a repeat of last month's news! There is a new blog for this blog hop, rather than us going straight to Misha's blog. Check out the new Do You Have Goals? blog, and join our hop if you want to have some extra motivation for achieving your goals. :)

Now, some updates on my own creative goals:
That's a wrap for September. How are you doing with your goals/projects/etc?
Posted by Trisha at 20:32

Email ThisBlogThis!Share to TwitterShare to FacebookShare to Pinterest
Labels: Blog Hops, Cassandra Clare, CITY OF LOST SOULS, Critiques, DAPHNE II, Do You Have Goals? Blog Hop, Goals 2017, NaNoWriMo, ON THE OUTSIDE, Reading, Revision, The Cephalopod Coffeehouse, THE MORTAL INSTRUMENTS