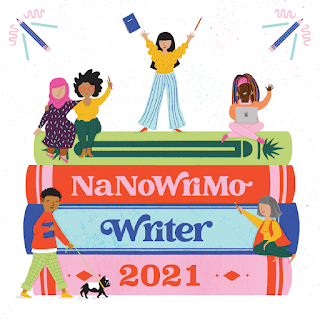 Wowee! I managed to make it back here for another blog post in another year. How good am I?
It's been another year of slight mayhem, partly because of COVID-19 still being a thing, and also because of work craziness still being a thing. I'm still involved in the cat rescue which is as crazy as ever as well, especially when you mostly have three people running the show and most of those three are burned out perpetually!
I have a headache right now, but that's not important. What's important is that it's November, woohoo, and I'm writing for NaNo again! Last year, one of the novels I had on my to-maybe-do list was titled HOME. Well, that's the one I'm writing this year - I didn't start on it last year at all, as I was busy enough with the other two projects I'd set myself.
I'm at 7,533 words after completing Day 3's writing, and I am just taking it easy. I only just got to over the daily word count today, and I could easily have kept going but decided to stop for the night.
I must say, I still have the same old problem I have struggled with for years - not doing enough editing, while I keep writing new stories. But at least the new ones have a decent structure behind them, meaning that in theory, when I do get to editing it shouldn't be TOO messy. Of course, that doesn't stop me getting stuck in revisions when one particular chapter proves a little too pesky for me to know how to fix.
Really though, the main thing that got in my way this last year and a half was:
1. COVID-19
2. Work being cray cray!
Even now, as we head for the end of the year, we are still having new projects flung at us at work, so there's really no rest for the wicked. Let's just say I can't wait for my holidays! (I have a week off next week, and three weeks off over Christmas)
Anyway ... Is anyone else out there participating in NaNo? If so, good luck and I'd love to hear about your project! If not, I hope you're having success with whatever you're working on right now!
Posted by Trisha at 20:57